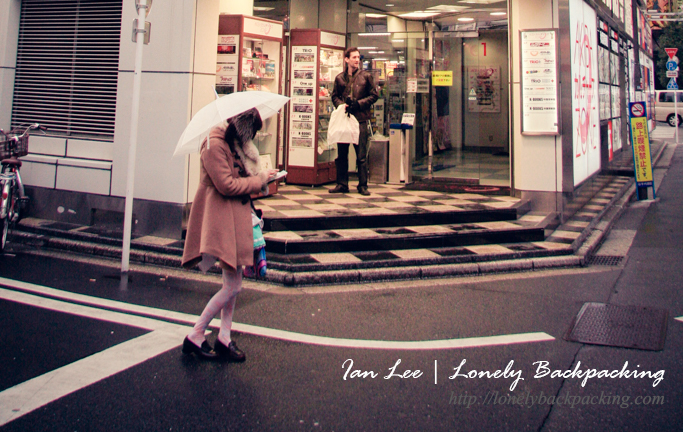 If you’re into Japanese Anime (アニメ), cosplay and sex toys, then Akihabara is the place you must go.

During the afternoon of 2/18, my fellow hostel mate Scott who’s also from Canada and I, decided to pay the place a visit.

As soon as we walked out of subway, there are whole bunch of cosers dressed in maid or schoolgirl costumes handing out fliers, it was such a pleasant sight.

Since we’re here, there’s no doubt we have to try the “Maid Cafe” that’s been really famous even in other countries.

Therefore, we picked a building that seemed kinky enough and checked the place out.

The first few floors were bunch of merchandises for nerds like myself, such as anime and comics figurines, play cards, posters… etc.

There were some kinky figurines too, it’s too bad that I forgot to take photo of those… (they were basically naked dolls)

On the top floor, we finally found the legendary “Maid Cafe”, the waitresses were dressed as schoolgirls here though.

We weren’t allowed to take photo inside the cafe, so this was just a quick snapshot of the place before they found out.

Apparently the waitresses that work in the cafe has assembled a girl group in entertainment industry, there was actually a TV program recording in the next room the day we went.

Also at some point, the waitresses started dancing to a very cute song, some customers interacted with them (like having fake tea with the girls?), that was too much for me so I simply sit out the whole song and enjoyed it.

When we left, we each get a membership card, and they said we could check our weekly ranking online too.

The merchandises there are just so advanced, you wouldn’t have even imagined such item exists before you see it.

One thing that was really weird though, we couldn’t find any internet cafe in the area, you’d think this sort of area is supposed to have whole bunch of internet cafes.